Role:   Animation trainer in Flash, After Effects and iStopMotion. The work in June also involved work as a PAW media worker.

About PAW Media and Communications

Last year in February and June I worked for PAW Media in Yuendumu, NT. In the role as a media worker I did some After Effects work on Willowra Wardilyka animation. I also did some captioning on a couple of other animations in the Animating Jukurrpa project working along side Adrian ‘Simba’ Jupurrurla Nelson. 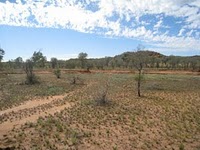 Jason Japaljarri Woods was another PAW media worker I had the privilege to work with. We worked on Flash animation skills and techniques, plus some PhotoShop work and also stopmotion (sand and paper cutout). I gave him some support on the projects he’d composited in After Effects (+ I was given some support in After Effects by PAW’s David Slovo!).

Jason recently completed his final animation in the Animating Jukurrpa collection (titled Wangarla jukurrpa). It is wonderful. His animation skills are impressive. His drawings come to life through patience, careful observation and analysis (a true animator). Below is a still from the animation: 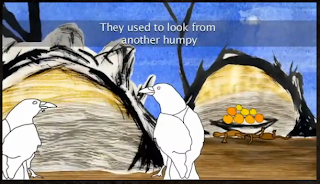 Jason, David and myself went out and recorded Neville “Cobra” Japangardi Poulson telling the Wangarla jukurrpa. Jason then went to work on designing the animation. Painting backgrounds and props, scanning and PhotoShopping these elements, and practicing drawing crows – then animating them in Flash. I was only there for four weeks so I have only just seen the final animation. It is beautiful and well worth a look, and while you’re there have a look at the other Jukurrpa story animations.

You can see the completed Wangarla jukurrpa animation here.

Thanks to Susan, Trevor, Simba, Simon, Jason, David, Gabrielle, and everybody at PAW Media for this opportunity.